After Sunday evening’s more substantial quake here in Wellington it took a couple of days before we could gain access to the building.  The building has been the “poster boy” for the quake so for a couple of days we knew more about what had happened to our office by watching TV. However, we were invited to return after structural engineers had been through the premises on Wednesday. We’ve got a few photos here for you if you’re interested (click here) but its back to business as normal!!

Speaking of which it’s not all about foreign pilots – all this hype in the media over the Skills Application by Air NZ is just that. However, what we do have is a very serious looming shortage.  This is not hype but based on fact.

Here are our projections out to 2015 for supply of CPL A and H (click here). You will see that the numbers being produced for CPL A are roughly 100 below the long term average supply of 200 pa from the previous 20 years.  For the H community the situation is significantly worse. Put this against a backdrop of over 24% of the ATPL holders being aged 51+(click here) and growth aspirations of around 5.5%pa and I think you get the picture.

Our objective is very clear and this is to train New Zealanders for high paying jobs working for New Zealand operators and then supplying personnel into appropriate careers within the wider Australasian South Pacific market. We say personnel because this strategy is not just about pilots, but it’s also about the 12 core aviation careers.  Pilots are the focus at the moment because the shortage is looming.

We are out currently talking to employers about the present situation and forward forecast for the next five years.  Those employers we have spoken to, all outside the Air NZ group, are saying

Developing and building the next generation of chief pilots in GA is a real worry because the opportunities are more diverse. Australasia is a much bigger market place.

Concern is starting to be expressed over the drop off in the number of practicing B cat instructors (click here). This is important because B cat instructors are the “backbone experience” of our training machine and secondly, a reduction of 50 means training throughput is reduced and there’s a lag before we can recover.

So what is the debate all about?

Security of the supply of qualified New Zealand pilots into high paying pilot careers. At the present time it’s not there. This is caused in large part by incorrect government policy settings for student loan funding. Put to one side the question of whether there should be student loans or not, the reality is that for other careers fully funded loans are available but for pilots that is not the case. Students are being required to fund significant portions of their training themselves.  This is in addition to the number of funded training positions being below the long term sustainability level for the industry.

This is not an issue that impacts on Air NZ. Employers feeling the greatest stress at the present time are those right at the “bottom of the food chain” and flight schools.

It could be argued that Air NZ is doing us an enormous favour by putting in this application.  If the application is turned down, the heat comes back on training sufficient numbers at the basic level.  If it’s approved, it proves our case that Government policy settings are inappropriate. Either way it confirms there’s a major problem looming.

We’ll be putting in a submission – note that the closing date has been extended to 9 August and on the basis of the survey, we’re presently undertaking, it’s very likely that we will support it for the reasons outlined above. We don’t think it’s desirable to put foreign pilots into jobs that New Zealanders should fill but on the other hand, we have to have security of supply at a number of entry levels across the industry.

Apologies to you H community types but essentially the forward forecast for this community is around 70 CPLs pa and from the projections the shortfalls will be around 40pa in the foreseeable future.

If you would like any photos of  a higher definition than just send us email and we can provide them for you.


TracMap. Winners of the 2013 Richard Pearse Trophy for Innovation and Excellence 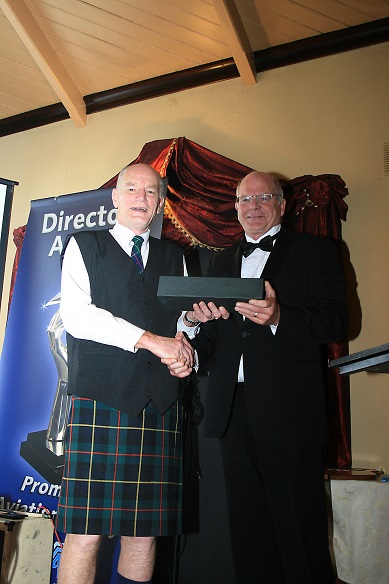 Colin Brown, President and MD of TracMap, recently awarded the Richard Pearse Trophy at our Awards Function at Larnach Castle, is well known in the Aerial Applicator industry, with most NZ based operators using their system.  The company is not as well known in the wider aviation field. Tracmap has introduced a number of innovations for aerial applicators, including a very easy to use and reliable GPS guidance system for aerial spraying, a system for precision dropping of toxic baits, and more recently, a very simple system for variable rate application of spray and fertiliser. It has produced a simple system for conducting Search and Rescue missions, which is fitted into many of NZ's rescue helicopters.


Over the last three weeks, we’ve talked about what we are doing in branding/building the profile, how we are growing the market and the relationship with government.  It all sounds good, but what are we really achieving in terms of new commercial successes?  A good question!

Much of this work is about moving from transactional relationships, to longer term strategic relationships with customers.  It is about doing things in a different way.  This takes time.  There have been some successes for companies involved in programmes and activities we have organised:

We’ve also seen some New Zealand companies achieve significant international success over the last few years.  These companies, in many cases, are blazing trails that other aviation companies can follow.  Next week, we’ll profile some of these companies. 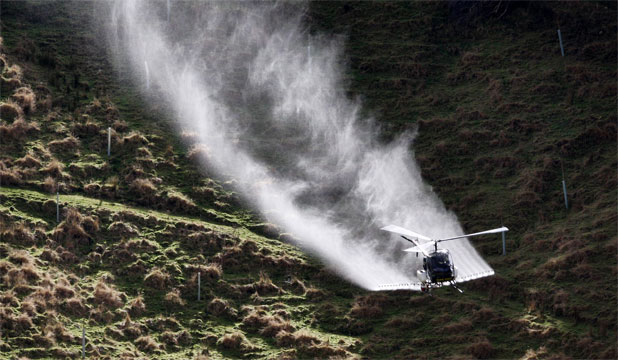 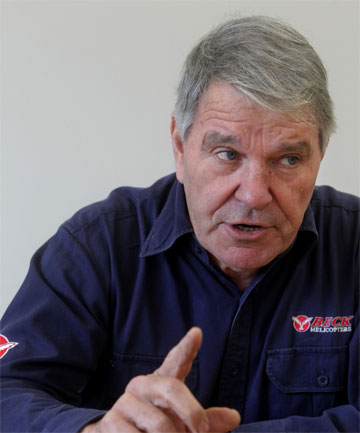 JONATHAN CAMERON/Fairfax NZ
ALAN BECK: "We have to improve our image and we have to get people to realise that agricultural production represents two-thirds of New Zealand's wealth."

Taranaki helicopter hero Alan Beck is on a mission to convince urban New Zealand of the value of agricultural aviation to the country's economy.
Agricultural pilots have been boosting New Zealand agriculture since he was a babe in arms, he says.

Kiwi pilots returning from World War II used their flying skills to spread fertiliser on New Zealand hillcountry farms, turning tough farming country into productive farmland and establishing New Zealand as a world leader in aerial topdressing.
Fast forward to the late 1960s when Beck, then an agricultural contractor, gained his pilot's licence and turned his attention to the next agricultural revolution in aviation - helicopters.
Now he's taking the controls of the New Zealand Agricultural Aviation Association (NZAAA) as Beck Helicopters - the country's oldest agricultural aviation company still in the hands of the original owners - celebrates its 40th anniversary.

Beck, who has a Queen's Service Medal for his services to search and rescue, is concerned that New Zealand's city residents have a poor understanding of the role of agriculture in the economy and of the contribution made by agricultural pilots.

But he does concede the agricultural aviation industry has not always explained its activities to the public. "We have to improve our image and we have to get people to realise that agricultural production represents two-thirds of New Zealand's wealth."

As part of that push to better understanding, the New Zealand Aviation Industry Association (NZAIA) - of which the NZAAA is a subsidiary - developed an integrated environmental safety and flight safety programme called AIRCARE™ three years ago.

AIRCARE™ is a rigorous code of practice for noise abatement and for the aerial application of agrichemicals, fertiliser and vertebrate toxic agents like 1080.

Helicopter Association International, with more than 2500 member organisations in 70 countries, is so impressed by AIRCARE™ that it wants to be able to use it.

"Our cutting-edge policy is far ahead of anything that's available in the US," Beck said. "New Zealand is well ahead in terms of compliance and codes of practice."

He predicts regional councils will increasingly expect agricultural aviators to be accredited to AIRCARE™ because it ensures waterways are protected from contamination by fertilisers and sprays.

Backing calls by Parliamentary Commissioner of the Environment Jan Wright for the Department of Conservation to increase the use of 1080 for possum control, Beck says laying the poison by helicopter has improved immensely since the somewhat indiscriminate methods of 30 years ago.

"It'll always be an emotional topic and there's a lot of misinformation about it. 1080 has done an amazing job on the mountain [Mt Taranaki]. Tourists can't believe the number of birds up there when I fly them over it. You can see pigeons and tui. The rebound in birdlife is phenomenal."

Banding of kaka, tui and morepork before a 1080 drop by Beck Helicopters near Tuatapere in Southland showed none had died.

He's full of praise for the efforts Taranaki farmers have made to clean up the province's rivers. Having had a bird's eye view of them from a helicopter for 40 years, he believes they're in the best state in the country.

"If people could see them from my point of view, they'd say the same. There's been a huge change in the rivers from where I see them. On mountain flights, I always fly over them to show passengers how clean they are."

He points out the industry's environmental awareness is not limited to the establishment of AIRCARE™. Beck says the use of GPS and the on-farm nutrient management tool, Overseer, has also brought huge improvement to agricultural aviation.

While the sector had "a brutally high" fatality rate, a pilot safety initiative had led to four years without a fatality, the longest in its history.

As NZAAA chairman for the next two years, Beck wants to see improvements in both the profitability and the profile of agricultural aviation.

"Instead of being seen as dung dusters, we want to be recognised as professional aerial applicators. We're not pouring dust around the hills. It's a specialised business that requires some of the most demanding flying imaginable."


Travel Careers & Training classrooms available AKL Airport (opposite the IBIS – 10 minute walk to Domestic Terminal). Available on a causal or long-term basis. Also available in AKL CBD. Contact Guy Domett on 07 853-0294. John Sinclair says this is the best deal on offer in auckland!!!!

Get a GO FUEL fuel card and get *8 cents per litre discount off pump price   on Petrol and Diesel for your car, truck, tractor, bus or boat. Its easy – No fees, no limits and get as many cards as you wish (*at participating Mobil service stations and truckstops)


GSB Trade Card click here - if you are a member and you haven't got your card let us know. The savings more than offset membership costs.
OTHER AIA members deals