TRoQ Agrichemical Review Consultation Feedback
Connexis has commenced a major review of the Agrichemical qualifications. The consultation process has so far included stakeholders from industry, training providers, and other Industry Training Organisations (ITOs).

Key Information
As a result of the first consultation meeting, a Governance Group was established to provide governance and guidance in the development of New Zealand agrichemical qualifications. Moreover the Governance Group established a Working Group from nominated representatives from industry, to further develop the strategic purpose statements, graduate profile outcomes, and graduate pathways identified at the Sector Consultation meeting, and to oversee the outcomes of the Working Group.

Feedback
The next step is to get input on the outcomes of this consultation from wider industry and other stakeholders. On behalf of Connexis and the Governance Group, I invite your feedback on the draft agrichemical qualification; specifically the strategic purpose statement and graduate profile outcomes. Your view is important and valued. 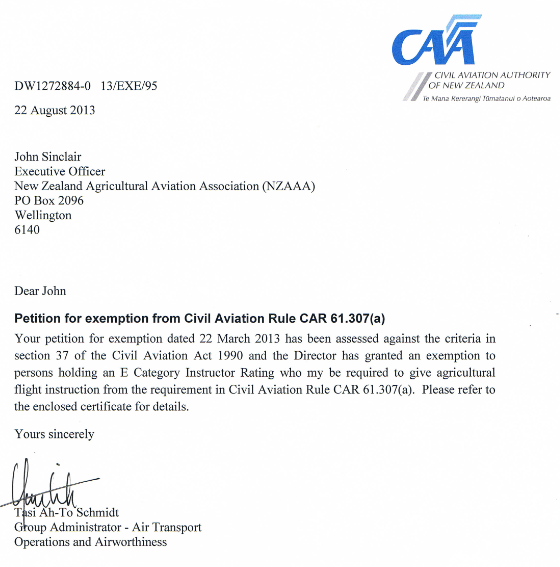 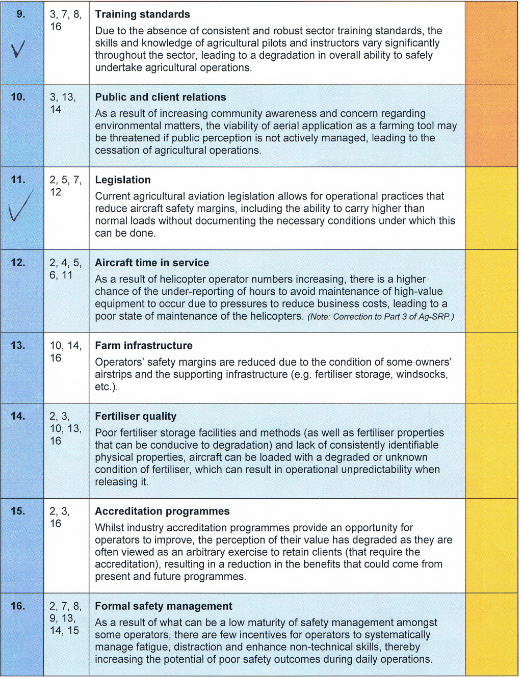 The following dates have been set for the 2013 Pilot revalidations:

At this stage there are only 2 Ground Crew course dates set: 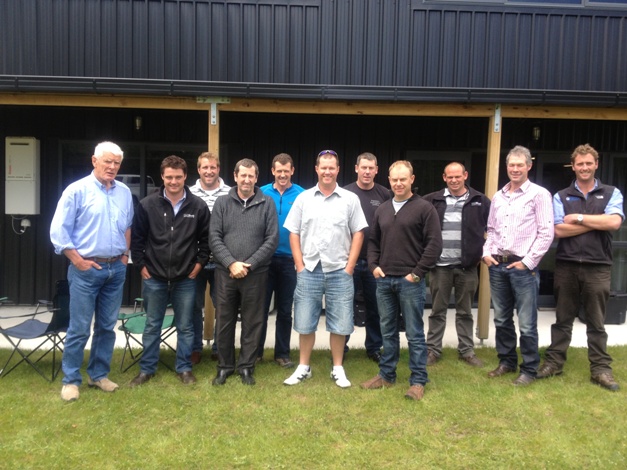 NZAAA/NZHA meets with CAA 18th September 2012
In Attendance: Graeme Harris (DCA) Mark Hughes, Chris Ford, Steve Kern, Geoff Connor, Ed Randell, Graeme Martin & John Sinclair
The first item was added to the agenda as a consequence of receiving an email from Harvest Electronics saying that they were withdrawing from the TiSR project on the basis of certification costs and “compliance fatigue.”

1)      Graeme Martin advised that he had spoken with Harvest Electronic’s Peter Munn and Peter had indicated a willingness to see the project through provided there was no more cost. He is unfamiliar with aircraft and operator certification and is used to working in a world where his innovation gets good outcomes without him having to jump through so many hoops. This is the second time he has become discouraged with the TiSR Project. AIA queried the requirement to have Harvest certified under Part 148 and why the units had to be fitted in accordance with an STC when AC43-14 Appendix 9 could suffice. AIA also offered to sponsor the project to conclusion (if CAA provided the funding) CAA advised:
·         CAA has been giving a whole lot of support to Peter Munn to get the TiSR across the line. Ray Harvey has been doing this as directed by Geoff Connor and Peter Munn has acknowledged this help and support. In their view the project was about one month away from conclusion.
·         CAA will continue to provide services at a much reduced rate but will not provide funding for this project as there is another potential player who would be disadvantaged. Rather CAA will consider offering a reward to the first TiSR manufacturer who gets a unit across the line.
·         Given the interest from CASA Graeme Martin is going to approach NZTE’s Peter Smythe to try and source funding.
·         CAA is going to revisit the TSO they wrote ten years ago to see what parts can be simplified using modern technology.
·         CAA agrees that Part 43-14 Appendix 9 may well serve the purpose for fitment.
·         The unit has to be sufficiently robust to be admissible in court and whilst AIA argued that the TSO should satisfy this test, CAA’s point of view is that production requires a quality assurance process and 148 meets that need. Already CAA has provided a heap of material for Harvest’s 148 manual.
·         Geoff Connor is going to get in touch with Peter Munn and encourage him to finish the project – offering all the help it can.
It is apparent that CAA is as committed to the development of a TiSR as industry is. It is also apparent that Graeme Harris is nervous about enforcing them when only one is available – but that won’t stop him doing it.

2)      NZAAA has concerns about the way CAA's HSE Unit is applying its HSNO Delegation. Whereas the HSNO Act s97e says that CAA is the enforcement body for HSNO "in or on an aircraft" this is being applied to "discharges" from an aircraft. Legal opinion tells us that discharge is solely the responsibility of RMA Regulators (Regional and District Councils) and that CAA is incorrect in applying HSNO in this manner. We appreciate that the EPA Technical Guide specifically connects aerial spray drift with CAA but argue that this document has no substance in law.
·         CAA asked what NZAAA’s problem was with this arrangement and suggested we would be better off under just the one regulator. NZAAA pointed out that its opposition was because of the duplication of having Councils and CAA both involved in enforcement and in any case, Councils are required to provide their own rules and enforce them under the RMA, irrespective of HSNO.
·         The HSE Unit is going way beyond its HSNO delegation when it is requiring compliance with all of NZS8409 instead of just the parts that relate to HSNO. There seems little appetite to change this.
·         If the EPA continues to support its current position NZAAA may consider a legal challenge.
·         CAA is going back to the EPA for clarification
Action Item: NZAAA to engage with EPA.

3)      NZHA raised the issue of 406 ELT reliability and the lack of a CAA response when the concern was raised by Lloyd Klee. At conference we heard from two different speakers that 406 ELT's have a success rate of just 15% and that is a concern to the industry. NZHA indicated its willingness to explore ways that this rate can be improved. Much of the issue appears to be aerials that are required by the rule to be "vertically polorised". This requirement assumes the aerial will be right way up when it is needed whereas in nearly all helicopter accidents the machine rolls over.
·         Spidertracks and Trackplus and Satloc can all be programmed to achieve same outcome as 406ELT but are more reliable as information is web based
·         Canada permits the use of satellite tracking as an acceptable substitute to 406ELTs
·         CAA advised that Ron Doggett had been working towards rewriting AC43 11 and 14 to help address the issue but they agree there is a problem by not being able to write an AC that contravenes a rule.
·         There seemed a willingness to issue a general exemption to the rule part that requires aerials be "vertically polorised".
·         NZ was one year ahead of Canada in introducing a replacement for the old 121.5 ELTs and may well have gone down the same track as Canada but at the time ELTs were mandated here, satellite tracking systems were not available.
·         CAA did not challenge the 15% claim and agree that there is a problem that needs correcting and were grateful it had been brought to their attention. (Even though Lloyd Klee has been communicating with them since February!)
·         Geoff Connor’s unit is going to revisit the issues around tracking and 406ELT reliability.

4)      NZHA/NZAAA wanted to discuss the crashworthiness of aircraft. Accident investigation does not usually identify anything more than just why the aircraft crashed whereas an engineer’s perspective might look at why the pilot died. In general, the industry wants to explore the mechanism that could be followed to make aircraft more crashworthy - especially in regard to fire as we were advised at conference of some six lives that were lost in post impact fires when the occupants would have otherwise survived. Items like fuel shut-off valves, tank bladders or foam filled fuel tanks may all help prevent these unnecessary deaths.
·         CAA advises that Annex 13 details the process for accident investigation and this requires that accident consequences are considered, not just whether or not the accident is survivable.
·         CAA also agrees that accidents are not always adequately examined from an engineering point of view. They agree that they are at risk when either TAIC or their own investigations are incomplete.
·         CAA advises that whether or not AD action is taken following an accident is decided after a cost benefit analysis. CAA may mandate the Robinson SB requiring fuel tank bladders be fitted.
·         CAA has agreed to take action to ensure that more engineering perspective is included in accident investigation

CAA welcomed the concerns the industry brought to the table and indicated a willingness to address these.

The first Chemical Rating Initial Course to be run at the Black Hangar took place 21st to 23rd August 2012. There were 12 students - all of them aspiring Ag Helicopter Pilots. They are photographed here with course presenters Murray Beare and John Maber. Special thanks go to Tony Michelle for his presentation to the course and to Rob Kitto and Steve Benyon for their contributions.

NZAAA ran another Demonstration Day at Omaka on 4th May

– this time for regional regulators. This coincided with the NZ Planning Institute Conference in Blenheim. NZAAA and the Sustainable Farming Fund Project team offer their sincere thanks to the Fertiliser Quality Council (FQC) for the sponsorship of this important event. The purpose of the day was to demonstrate best practice, demonstrate the limitations and challenges of aerial application and show the regulators what the industry is doing to manage its risks from discharges. The day was very well received and the visitors appreciated that we were showing off our industry – warts and all.
Demo Day Presentation
Opening Address
Planning for Success in Agricultural Aviation

The RIS for rule Part 137 has been made available to NZAAA, and you can read the response to it here

To celebrate the launch of the GE Capital NZAAA ecomagination Award, we’ve sent out a launch pack and cover letter to all NZAAA members via mail. You can download the entry form here and launch pack here.

More information can be found at http://www.ecomagination.com

The first stage of the SFF project "Environmental Best Practice in Agricultural and Rural Aviation" has been completed with the 16 Regional meetings finished. You can access the report on these meetings here

For all aerial information involving:

Ground Crew course for both loader drivers and those wishing to go on to the Initial rating course:

South Auckland 4 November Note: This venue may change to Taupo

These dates are probably the last for the year so anyone wanting to do any of these courses better sign in asap. After that, it will be on a full cost recovery. Please contact Penny Guy for information and updates on any of the following contacts:

This 3-year MAF Sustainable Farming Fund project got under way this month with a Stakeholder group meeting in Wellington, then the first two of sixteen regional meetings to be held around NZ. A copy of the presentation to the Stakeholders is here

CAA has not accepted this as an industry practice, but we are interested to read any documentation that may show a contrary view. The requirement will remain under the amended Rule Part 61.305.